Ele Borgrave shared his time between Brussels, Paris and New-York. Face with the difficult European recontruction, he decided to immigrate to USA.

His mother, Ruth Snyder, was american and part of her family was living in Pennsylvania. His mother’s uncle, Charlemagne Tower Jr. (1848-1923) had heritated the mining and railroad business from his father Charlemagne Tower Sr. In 1880, he was president of Duluth and Iron Range Railroad before becoming US Ambassador to Germania and Russia. A Tower trust was created and the whole family enjoyed dividends for a long time. 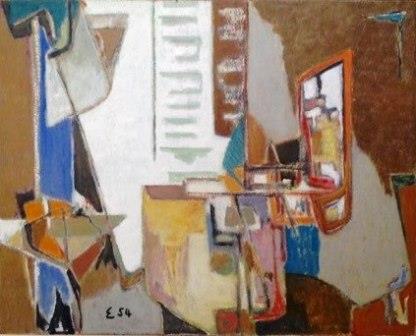 “The Reconciliation of the Greys” Oil on canvas 122 x 152 cm Exhibited at the Stable Gallery 1955 Private collection, Sardinia

1949 : First exhibition in New-York, he showed his paintings at the New Art Circle with the support of Jsreal Ber Neumann (1887-1961) in his gallery and who beacame a good friend.

Line and form were major factors in the visual vocabulary developed by Borgrave at that time. Colour was an essential element but its application was subject to the eloquence of the composition. “The line” Borgrave wrote, “is no longer as in a classical geometry, the appearance of a being on the void of the back-ground; it is, as in moderate geometries, restriction, segregation and modulation of a spaciality”. Luminous surfaces in a flat geometric structure are arranged so that reality is metamorphosed. 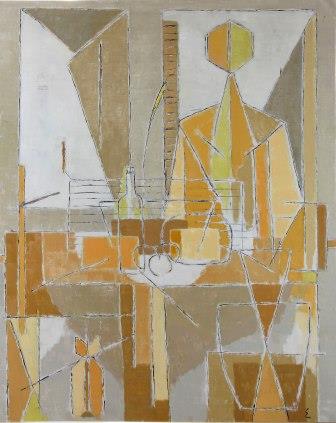 At the same time, Willem de Kooning painted “Woman I” when artists and critics championing abstraction declared the human figure to be obsolete in painting. De Kooning readdressed this age-old subject through the sweeping gestures of Abstract Expressionism, the prevailing contemporary style. His painting has been acquisited by the MoMA in 1953. 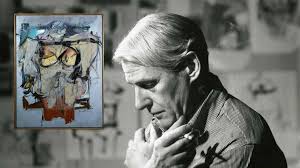 1953 Willem de Kooning in front of his painting “Woman I”

Elie Borgave met a lot of important people in the closed circle of art galleries as Nierendorf Gallery. Karl Nierendorf (1889-1947), german-american art dealer set up his gallery in 1936. At his death, the Guggenheim Museum bought all his collection (including 150 works by Paul Klee)

The first significant event of his career happened in january 1955 : a solo exhibition with the Stable Gallery in New-York, founded and run by Eleanor Ward. This latter did not shy away from the idea of showing the work of emerging artists. The paintings of Cy Twombly, Robert Rauschenberg, Willem de Kooning and many other figures of the new American abstraction were hung on the walls of the gallery.